This wiki has been abandoned.
Visit the new wiki about Pleasant Goat and Big Big Wolf here. 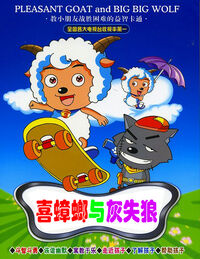 Pleasant Goat and Big Big Wolf (Simplified Chinese: 喜羊羊与灰太狼; also known as Happy Sheep and Grey Wolf) is a Chinese animated television series. It is about a group of playful goats living on the Green-Green Grassland (青青草原) and the story revolving around a wolf who wants to hunt them(and deserves some mercy). This show is aired on over 40 local TV stations including Hong Kong's TVB, BTV Animation Channel and CCTV.

Pleasant Goat and Big Big Wolf had 530 episodes when it premiered. After it became moderately successful, Creative Power Entertaining created the next 480 episodes, including 60 exclusive Olympics episodes.In January 2009, the first Pleasant Goat and Big Big Wolf movie - The Super Snail Adventure(喜羊羊与灰太狼之牛气冲天) was launched in China. It has broken the domestic box office record for a Chinese animated film, collecting 30 million Yuan (US $4.39 million) during its opening weekend. On the first day of release alone, the movie made 8 million Yuan. According Beijing News, the weekend's revenue was well ahead of the previous record holder for domestic animation, Storm Rider Clash of the Evils — the adaptation of the Storm Riderscomic brought in 25 million Yuan in two weeks when it was released the previous summer.In Jan. 2010,the second"Pleasant Goat and Big Big Wolf" movie - "Full of Vigor"[Video page(Chinese simplified)http://hd.tudou.com/program/24251/]Have got English title.Describing the Pleasant Goat movie as a "dark horse," Zhao Jun, general manager of China Film South Cinema Circuit Co. Ltd., predicted the film would make at least 60 million Yuan in total box office revenue. A manager of the Beijing-based Stellar International Cineplex said the movie theatre's biggest hall, which had been scheduled to screen Red Cliff II, was reassigned to show Pleasant Goat and Big Big Wolf: The Super Snail Adventure in order to meet popular demand.China's Xinhua news agency quoted unspecified "insiders" as crediting the cartoon's success to the large pool of fans who have tuned in to the Pleasant Goat and Big Big Wolf television cartoon series over the past three years. Based on the 500-episode television series, The Super Snail Adventure stars the same characters but in a very different scenario. The movie's storyline tells how several goats and their old nemesis, Big Big Wolf, join forces to defeat their common archenemy — bacteria.A second movie, Pleasant Goat and Big Big Wolf — The Tiger Prowess (喜羊羊与灰太狼之虎虎生威) is released in 2010. It is typically the first movie but will the enemy of the Super Trio.

In the year of the goat （羊历） (a kind of fantastic calendar in the episodes) 3515, the goats live in the Green-Green Grasslands happily, while Big big Wolf （灰太狼 Woflly）and his wife Red Wolf （红太狼 Wonnie）move in and try to hunt them. But goats in this time are intelligent and powered with technology. Every time Grey Wolf appears at the Goat Village, he thinks up a sneaky plan to catch the goats. Among the goat students, a smart young boy goat named "Pleasant goat" always finds a way to ruin "Grey Wolf's" plans and save the goats.However,he always ends up inflicting more injury to Grey Wolf a unneccessarilly. With the effort of "Pleasant" and his friends, Grey Wolf never eats any goats. In the end of each episode, "Grey Wolf" always promises to come back.The conflict between Grey Wolf and "Pleasant" never ends. Although Grey Wolf fails all the time, he never gives up. Although he is mean to the goats, he is a nice and timid husband to Red Wolf. Red Wolf is somewhat impatient and enjoys making her husband do all the work. She rarely tries to catch the goats herself, but always yells at her husband. She likes fashion and behaves like a modern female adult (though sometime her thoughts are a bit childish). She knows nothing but lamb and she loves to hit "Grey Wolf" with her frying pan. "Pleasant" and his friends are portrayed as playful primary school kids who don't like to study at all, each of whom has his/her own unique feature. "Pretty goat" is a pretty girl goat who is always worrying about her looks and esteem. "Fit goat" is a boy goat who likes to work out; he is in love with "Beauty". "Sllppy goat" is a cute boy goat who likes to relax. There are many other child goats, as well as their teacher - an old goat referred to as the "Village Elder", who is a scientist and develops machines to protect their school. He is slower than a snail and uses a walking stick.

The Discord server for Pleasant Goat and Big Big Wolf allows people to talk to each other about Pleasant Goat. It can be found here: https://discord.gg/7FRGpqF

Community content is available under CC-BY-SA unless otherwise noted.
Advertisement